Frederick Douglass's books are great... but there are so many more to read 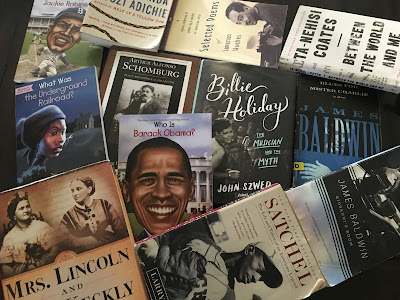 A lot of people have talking about Frederick Douglass in the past 24 hours. I'm gonna choose to see this as a good thing. Because FD has an incredible story that everyone should know. But his is one of so many stories that we should be sharing this Black History Month 2017.

To help you and your family or classroom or afterschool group or book club get started on a wonderful month of reading and learning about Black History, I've put together a little reading list. It has everything from picture books to big fat historical tomes.

I've also made a playlist of related songs. These tunes are all from my solo albums or albums by Deedle Deedle Dees. Except for the traditional "Follow the Drinking Gourd," I wrote all these songs. https://soundcloud.com/lloydhmiller/sets/because-some-of-us-really-do

These books are all easy to find for purchase online. Or, even better, at your local library or independent bookstore.

Only Passing Through: The Story of Sojourner Truth by Anne Rockwell, illustrated by R. Gregory Christie  A picture book about Sojourner Truth I've recommended -- and read out loud at library and other shows -- for years

Mae Jemison (Rookie Biography series) by Jodie Shepherd This is one of those slim, simple biographies for kids. But it's a decent intro to Jemison, the first African-American woman in space (that we know of). And speaking of space...

Hidden Figures: The American Dream and the Untold Story of the Black Women Mathematicians Who Helped Win the Space Race by Margot Lee Shetterly Yep, this is the book they based the movie on (I always like the books better).

The Doctor With An Eye for Eyes by Julia Finley Mosca, illustrated by Daniel Rieley Part of new series about scientists, this book (coming out soon) tells the story of a Dr. Patricia Bath, a woman who grew up during the Civil Rights movement and aspired to be a doctor

My Bondage and My Freedom by Frederick Douglass Like many people, I read an excerpt of Narrative of the Life of Frederick Douglass in high school English. It's in many anthologies and is often the one slave narrative read (if one only reads one). It's amazing. But about 10 years ago, I discovered My Bondage and My Freedom, a book where he tells the story of the same events as Narrative from the perspective of a man later in his life and offers his thoughts on slavery, race in America, and other relevant topics. Read both if you can (you can often find both in one volume) but if you've never read Douglass before and need somewhere to start, I'd go for My Bondage and My Freedom.

Between the World and Me by Ta-Nehisi Coates In New York City, where I live, I've seen at least people reading this book on the subway (the best place to read on the planet) many times, found it on the shelves of nearly everyone I know, and discussed it with at least 30 different people. It's kind of THE book for thoughtful people. I'm glad it's had the legs that it's had, continuing to be read by more and more people (and not just the New Yorker subscriber demographic). What is it? It's history, it's sociology, it's memoir, it's book about being black -- and being human -- right now in the world. You can read it in an afternoon or two. Instead of debating whether you should read it, just get it done. You can borrow my copy (GIVE IT BACK!)

Satchel: The Life and Times of an American Legend by Larry Tye, Only the Ball Was White: A History of Legendary Black Players and All-Black Professional Teams by Robert Peterson, We Are the Ship: The Story of Negro League Baseball by Kadir Nelson Two of the songs on my playlist ("Cool Papa Bell" and "Bring 'Em In") are about Negro League baseball players, players who played in the black baseball leagues pre-integration. These are three of my favorite books on that subject: a biography of Satchel Paige, the definitive history of black baseball in America, and a stunning illustrated book written and illustrated by the untouchable Kadir Nelson.

Kevin Garnett (Basketball's MVPs series) by Dan Osier We love sports biographies around my house. My son, a soccer and basketball fanatic, has checked nearly every one out of his school library (even the football and baseball ones). This one, about Timberwolves / Celtics star Garnett, is one of his favorites. He also likes the Dwyane Wade one. And anything about LeBron. I put this book on the list because I want to reinforce the idea that all reading is reading, even quickly-produced mass market biography books. I read a ton of books like this as a kid and when I say "read," I mean I read them over and over and over and over again (yes, I'm quoting Marshawn Lynch). My kid is into the NBA and the British Premier League so we read lots of book series on these topics but there are all kinds of  informational series out there that are excellent ways to get your kids obsessed with reading... and with black history.

I Was Born a Slave: An Anthology of Classic Slave Narratives 1172-1849 edited by Yuval Taylor, foreword by Charles Johnson This is an excellent volume that compiles more famous slave narratives like Incidents in the Life of Slave Girl by Harriet Jacobs (which inspired my song, "Trapped in the Attic") and Solomon Northrup's story that they used as the basis for the movie 12 Years a Slave with lesser known but no less captivating tales from the late 18th century through the first half of the 19th century.

Billie Holiday: The Musician and the Myth by John Szwed My friend leant me his copy of this. Open to any page and you'll find another unbelievable story of Billie.

Who Was Harriet Tubman? and What Was the Underground Railroad? by Yona Zeldis McDonough, Who Is Barack Obama? by Roberta Edwards, Who Was Martin Luther King? by Bonnie Bader, Who Was Nelson Mandela? by Meg Belviso, Who Was Muhammed Ali? by James Buckley Jr., Who Was Jackie Robinson? by Gail Herman and Nancy Harrison There are a ton of these Who Was / Who Is / What Was books written by different authors. I listed the black history-themed ones I can see on our shelf in the living room but there are also ones about Rosa Parks, Sojourner Truth, Maya Angelou, and many many others. I like 'em! Admission: Our family favorites are the ones about Nelson Mandela and Genghis Khan (yes, the latter doesn't fit my black history month theme, but whatever).

Mrs. Lincoln and Mrs. Keckley: The Remarkable Story of a Friendship Between a First Lady and a Former Slave by Jennifer Fleischner, Behind the Scenes: Formerly a Slave, but more recently Modiste, and Friend to Mrs. Abraham Lincoln by Elizabeth Keckley Elizabeth Keckley was a former slave who made dresses for Mary Todd Lincoln and developed an unlikely long-term friendship with her. The first book here is a well-done recent book about the friendship, the second is Mrs. Keckley's own version of her story.

Panther Baby by Jamal Joseph Jamal was my thesis advisor at Columbia. This is his memoir about the Black Panthers. Incredible.

Arthur Alfonso Schomberg: Black Bibliophile & Collector by Elihor Des Verney Sinnette My friend picked this up for me at the gift shop on a recent trip to the amazing Schomberg collection in Harlem to do some research. So glad he did. I knew nothing about this guy!

Giovanni's Room and Blues for Mister Charlie by James Baldwin I had to include a couple of non-history books (but books filled with history) by one of my favorite authors. I acted in Blues in college, did music for another production of it a couple of years ago.

Americanah by Chimamanda Ngozi Adichie I want to list about 20 more novels but I'm going to stop with this one, one of the best of the past few years. A book about a woman who moves from Nigeria to America... then moves back to find that she's now considered an "Americanah," someone forever changed by her time in the United States. A book about what it means to be a immigrant. To be a black woman. To be a person. What "home" is. A book for anyone who's ever tried to figure themselves out.

Oh and there are so many more books I want you to read but... So many other things to do. Songs to write and whatnot.

What are some of your favorite books on this theme?