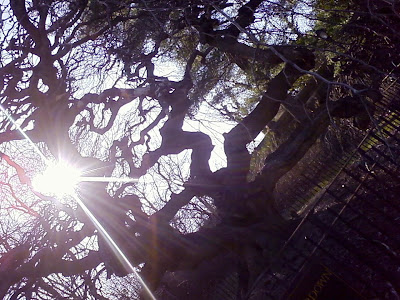 
I wrote this song when I was teaching the Nature Babies program in Brooklyn's Prospect Park a few years ago. Story as I heard it is this: on the estate of the Earl of Camperdown in Scotland, an elm's twisty branches were growing along the ground. His gardener grafted this tree onto another type of elm and created a new "mutant" tree. This new type of tree was still super twisty -- and the branches still threatened to touch the ground -- but at least they were now up in the air like a proper tree. This was the Camperdown Elm, a very unique-looking tree that wouldn't be out of place in a Lord of the Rings film. The Earl gave one of his singular trees to Prospect Park at some point. You can see it by entering the park on the east side at Lincoln Road.

In the 1960s, the Camperdown Elm was dying. Often, given how swift and brutal elm disease can be, ravaging every tree nearby, elms are just cut down when they first show signs of illness. But when the Camperdown Elm got sick, concerned citizens -- aided by a Marianne Moore poem hailing it as "our crowning curio" -- managed to convince officials that this tree was different and worthy of being saved.