Our next album: "work" in progress

On our last album, Strange Dees, Indeed, we developed the song "Mayor LaGuardia's Stomach" around a story Esther Levine (grandma of Ari Dolegowski AKA Moby Dee) told us. Ari and I spent a whole afternoon interviewing and recording Esther and she told us dozens of stories. We chose her tale of bumping into Fiorello LaGuardia as a young woman because it was really well suited to a quick snappy jazz composition Chris (Booker Dee) had written but she told us lots of other great stories, many of which might make for good songs, either ones where, like on "Mayor," she would narrate backed up by our music or where we would sing a song inspired by what she told us. It got me thinking that I'd like our next album to be a collection of tunes derived mostly from stories people tell us rather than stories we've read in books. Sort of Studs Terkel / StoryCorps approach to songwriting.

For much of the last year I've been considering different themes for such a record. After much deliberation, experimentation, and consultation with my wife I've finally made up my mind. The next Dees record is going to be all about work. The work we do, the work our parents and grandparents did, the paid work and the unpaid work that's the substance of our daily lives, the work kids do, the work parents do, the essential work that goes unnoticed… We're going to talk to a lot of people and, when possible, involve them in the actual songwriting process. Esther has some great stories about jobs she used to have and so these might show up in some form. There are a number of friends and acquaintances (among them, a firefighter, a surveyor, a lice picker, a neurologist, a deep sea diver, a subway track repair engineer, a chef, a cop, a "trash-out" contractor, an actor, a mechanic, and many many teachers). I'd like to interview, preferably with the help of kids, about their jobs. I'd like to interview kids about jobs they'd like to have and what they think is involved in certain jobs (they have some interesting ideas about this). I'm going to Haiti in October to do a songwriting project with some kids at an orphanage and so I'm going to talk to them about their daily work. I'm volunteering with Sing for Hope and would like to write songs with people at hospitals, adult care centers, schools, and other places where I perform. I might write songs about the many jobs I've had and the ones I have now.

We're planning to do an official debut of this project March 2nd at Symphony Space in NYC. We might have the album done by then or we might just play a set of songs we've written by that point. Between then and now, we'll be collecting stories and trying to involve as many people in this collaboration as possible. Will you join us?

I'm starting a blog, probably a Tumblr, where anyone can post their own stories, photos, videos, and songs related to this project. I'll also be putting drafts and works-in-progress up there. Details on this soon.

Send us your thoughts. And let me know if you have a class or other group you think might have some stories to share with me.

Not sure if we played 'em exactly in this order but here are the tunes we played at Musikfest in Bethlehem today.

Lyrics, related books, and other stuff connected to these tunes should be easy to find on this blog -- scroll down through the list of titles on the left or search for a particular song. If
there's something you can't find, send me a note: thedeedledeedledees AT yahoo DOT com.

Here are the scribbled set lists on top of the sweaty shirts I wore. As usual, our actual sets diverged from what I originally wrote down. 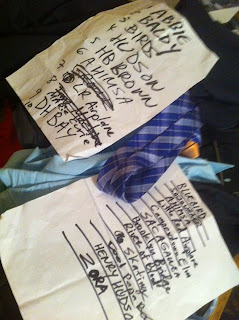