The lyrics to "Cipher Cipher," our new song based on events in the life of Benjamin Church, contain a real Revolutionary War era code. I wrote the song with Arden Gill, a middle schooler I teach electric bass and ukulele. The Deedle Deedle Dees debuted this song at our show at BAM this past weekend -- and Arden helped us perform it.

Church was the head doctor in the Continental Army, but he was also a spy for the British and sent their leaders messages in code. Arden wrote a report about him for English class and her teacher suggested she write a song about him with me.

The chorus to our song is all numbers. The numbers stand for the letters of two words, the names of places where the Continental Army had arsenals (places where they kept weapons). We translated the names of the two places into code using Lovell's Cipher, an actual code used by leaders of the Continental Army. As Church was sending secrets to the British I guess he would have used a different code but I felt Lovell's system was a nice simple one for us to use in the song and to teach kids about how codes work.

ARDEN
cos you're a surgeon?

location of the arsenals
i just sent it to ya
do you know the cipher?
did they explain it to ya?

Here's how Lovell's system works. When you send someone a message, you also include a keyword. This keyword tells you which letter is represented by each number. If you read the link above, you might already understand how this works, but here, in brief, is how you do it:

1. Lay a piece of paper longways. Write numbers 1-27 across the top of the page. Write small because it's hard to fit all those numbers on one line. Why 27 when there are 26 letters in the alphabet? It's because there's an "&" in addition to the 26 letters -- just to make the code a bit more difficult.

2. Write the alphabet starting with the first letter of the keyword on the next line so that the letters line up with the numbers above. The keyword Arden chose was "mustache." In the interest of keeping our code relatively easy to solve we only used the first two letters of this word. So the alphabet you write under the numbers should start with the letter M. When you get to Z, don't write A next. Instead put an "&" symbol then write A under the next number.

3. Underneath this alphabet, write another alphabet starting with the second letter of your keyword, which in this case is U. Don't forget to put an "&" in between Z and A.

(Note: if you need help with steps 1-3, see the example in the picture below)

5. Once you've figured out the first word, return to the first line to start deciphering the second one. 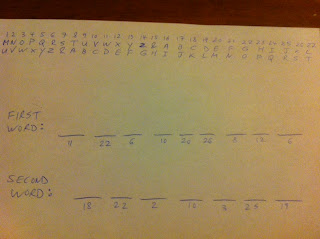 We're going to post lyrics and videos for the brand-new stuff we wrote for this event inspired by works from the Met's collection, but for now here are the songs we played. In the spirit of the event theme, we played all songs about "Heroes & Heroines."

Standing in the Garden / Visions
inspired by Bastien-Lepage's "Joan of Arc." I wrote this with Bella Butler, a 4th-grade student who also performed the tune with the band last night.

Ah Ahimsa
a song about Gandhi's philosophy of nonviolence

Henry (Hudson), How Ya Gonna Find a Way?
a tune about the explorer that got a river named after him


SET 2, 7pm
Henry Box Brown
a song about the man who mailed himself to freedom from slavery in a box

Everybody Flat Against the Wall
a new dance craze (we hope), inspired by the Assyrian reliefs

Sacagawea
about the woman who traveled across the country with Lewis, Clark, and a baby on her back

Here's what we played during our two sets at BAM this past Saturday, Feb 2, 2013. Most of these songs are on albums but some are brand-new. Lyrics and notes to nearly all these can be found on this blog -- and some we're adding this week.

"Cipher Cipher" is a brand-new song based on events in the life of Benjamin Church, a doctor for the Colonial army & spy for the British during the Revolutionary War. This one contains a real Revolutionary-era code that we'll put up in separate post specifically about that song.

Words & music for all these by Lloyd H. Miller (me) except "Mean-Talkin' Blues," words and music by Woody Guthrie, arrangement by me, Chris Johnson, and Roy Nathanson.

The Golem (featuring Gabe Nathanson on trumpet, Roy Nathanson on sax, Maya Chatterjee, Emily Serotta, and my kids on vocals)

Working on a Bridge (w/ Emily, Margaret, and Arden on vocals)

a song for Abigail Adams

Henry (Hudson), How Ya Gonna Find a Way? (w/ Arden on Margaret on vocals)