The Truth About New Jersey 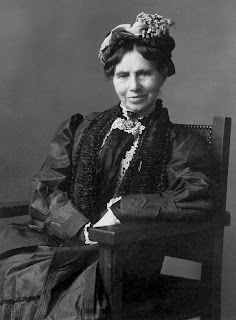 We're entering the rough draft phase of our composition process in Montclair, New Jersey, where I'm going once a week to write songs about great stories from the state's history with fourth-graders.

Clara Barton, one of these great stories, is at left.

The songs will be presented in a big show in less than a month at the Alexander Kasser Theater at Montclair State University. Tentatively titled "The Truth About New Jersey," our presentation of the songs will feature all four Deedle Deedle Dees and an entire fourth-grade class. These are amazing kids -- they'll be singing, rapping, playing guitar, keyboard, violin, viola, drums, and other instruments, dancing, acting.

Everyone must come to this show. And, if you write us right away, you might have a chance to contribute to our songwriting process. Here's what we have so far (these are all working titles that I've given the songs):

Some questions for you:

Who have we missed? Obviously the show can't cover the entire history of New Jersey, but we're willing to consider innovators, revolutionaries, first-timers, and other interesting barrier-breakers who you think should have a place in our little musical celebration of the state.

How do you feel about Wilson? To be honest, it's hard for me to get past all the segregation stuff. I know that's just one aspect of a very important and complicated figure but it's all I can think about as I read about the Fourteen Points and all that other textbook Wilson stuff, searching for something to help the kids with their song. If only I had never read Howard Zinn...

Songs in progress, song possibilities:
should I continue to try to write these songs I'm trying to write?
Communipaw -- Washington Irving's mythological stronghold of Dutch culture, today Jersey City. Definitely a song to be written.
NJ Underground Railroad Instructions -- There were a few main routes through the state. I think an instructional song accompanied by a driver's ed-style filmstrip of current Jersey roadways that lie along the old escape routes is in order.

driving: The university is at One Normal Avenue. But if you enter "1 Normal Ave" into Google Maps it will take you to the middle of a nearby reservoir (seriously, I tried it). Use Google to get to Normal Ave in Montclair then use a real map.