Just back from the Ezra Jack Keats concert at Symphony Space. So fun! The event was hosted by Abena Koomson, one of the stars of the new Broadway musical, Fela! She read a book by Mr. Keats as did Sonia Manzano (Maria from Sesame Street!) and Dominic Colon (The Electric Company). Randy Kaplan played three new songs based on Keats books and so did the Dees. Thanks for a great morning, everyone!

Some folks at the show were asking where they could find recordings of the new songs we performed. We sang songs based on the Keats books, Apt. 3, Over in the Meadow, and John Henry. We're talking to the Ezra Jack Keats Foundation about the possibility of recording these tunes so hopefully, sometime soon, you'll be able to hear full studio recordings of all the great new tunes that Keats books inspired. Wouldn't a compilation of all these songs be an amazing kids album? In addition to the Dees and Randy Kaplan, past Keats events have featured Astrograss, They Might Be Giants, and other excellent performers. Check this blog for updates.

I also wanted people to know where they could read and hear more about the John Henry story. After you read the Keats book (a unique and powerful retelling of the classic tale), you should first check out a few of the endless songs that have been written about this legend. Woody Guthrie and Pete Seeger's takes on what is probably the most well-known "John Henry" are both good starting places. Springsteen does this tune as well and I have to thank him for introducing so many Brooklyn kids to this old song (They request it at birthday parties now -- mainly because they've heard Springsteen's version.)

Some other songs in the JH canon not to be missed:
Mississippi John Hurt's "Spike Driver Blues" -- untouchable
Leadbelly's "Take this Hammer" -- I sing it to my daughter in the swing

Grown-ups should definitely pick up Steel Drivin' Man: John Henry, the Untold Story of An American Legend by Scott Reynolds Nelson. He hunts through the prison records and finds a man who could very well be the historical John Henry. Details in many of the stories and songs about John Henry point to him most likely being some of chain gang laborer and Nelson's explorations are a thrilling trip through the early days of building industrial America by hand.

This is how we swing... John Henry! 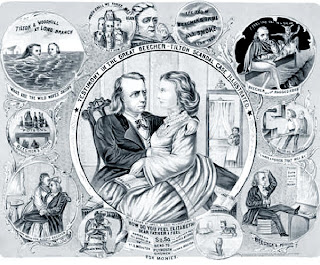 Yes, it's true: I have not posted ever since I announced the September selections for the Deedle Deedle Dees American History book club. This is because I've been very busy finishing up stuff for our new album, American History + Rock-n-Roll = The Deedle Deedle Dees. I've also discovered, on talking to some Brooklyn folks on the street, that no one (except me) has actually read September's grown-up selection, The Most Famous Man in America: A Biography of Henry Ward Beecher. A number of people have told me that they want to read it and that as soon as they get a copy, that they plan to read the heck out of it.

But that's okay. I'm going to write about the book anyway and hope some of you are inspired to get started. Before I begin my short discussion of this very fascinating book I want to talk about how I'm going to change the book club yet again in an effort to get more people involved. Here's how:

- Books will be seasonal rather than monthly. In other words, you have from now until 12:01 am January 1, 2010, to read one (or more than one) of the following books:

The Most Famous Man In America: A Biography of Henry Ward Beecher by Debby Applegate
In the Heart of the Sea by Nathaniel Philbrick
The Thoreau You Don't Know by Robert Sullivan

I'll tell you more about the two new books in another post. For now, just pick the title you like best, look it up online and order it. All these titles are very much worth your time. Better yet, find it at your favorite local independent bookstore. If you live in Brooklyn, Book Court on Court Street is going to start stocking all our book club books. They're lovely people. Shop there.

As avid readers of this blog know, the book club also features chapter books for elementary-aged kids and picture books for the pre-readers in your family. I'll put the new kid books in another post that's specifically devoted to family reading and the specific books.

Now, back to Beecher:

Henry Ward Beecher was the pastor of Plymouth Church in Brooklyn Heights in the years before, during, and after the Civil War. During his time there he became, arguably, the "most famous man in America" due to his passionate and theatrical sermons that drew capacity crowds every Sunday. Mark Twain, Edna Dean Proctor, Walt Whitman, and some guy named Abe Lincoln were among the many who wrote or spoke of their admiration for his oratorical skills. Beecher talked about sin and redemption just like many of his peers, but he also told a lot of personal stories, stories about real people, and extended anecdotes that were very different from what anyone else was saying in the pulpit. He had a particular talent for imitating all sorts of different types of people and would use his remarkably elastic voice and expressive face to act the part of all the characters in a story he would tell. Many descriptions of his sermons / performances depict him stomping around the stage, his long hair flying, his body constantly assuming a new posture to make a new point. In many ways, he was one of America's first nationally-known entertainers -- his appeal went far beyond his religious audience.

The first two-thirds of Debby Applegate's book on Beecher are pretty standard issue general interest biography ( I love standard issue general interest biography). The final act of the book, however, has a breathless, ripped-from-the-headlines feel -- this is the section where Beecher's various (alleged) indiscretions start to catch up with him and become part of the public dialogue. After living through the public scandals involving Bill Clinton, Michael Jackson, Eliot Spitzer, and so many others, I found Beecher's ordeals both extremely familiar and a tad redundant (Oh no, not this again!" I found myself groaning). People just love to humilate a popular, powerful figure it seems and even without the internet or 24-hour cable channels, the media (newspapers and street gossip) of late 1800s America managed to overwhelm the public with constant Beecher coverage.

What are your thoughts on this book? On Beecher? Write me.
Posted by Lloyd H. Miller at 9:39 PM